Mah-Jong  (pronounced with a soft “J” and variously known as Mah-Jongg or Mahjong) is a charming Chinese game played with engraved tiles. Traditionally, the tiles have been made from ivory or bone dove-tailed into bamboo. But a variety of other materials has also been used including wood, Bakelite, resin and modern plastic.

The exotic tiles, the oriental associations and the rituals which surround the game lend it a certain mystique and perhaps make it somewhat forbidding. However, although the rules are quite intricate, the rudiments of play are surprisingly easy to master and it is not unusual for a beginner to do quite well.

Origins of the Game

Although there have been claims for its antiquity, it seems most likely that the game originated in the Nongpo area of China in the latter half of the nineteenth century. It quickly spread to other countries in the early part of the twentieth century, becoming popular in the West in the 1920’s.

Forms of the Game

Along the way the rules mutated into a variety of national forms; Hong Kong, Japanese, Taiwanese, Vietnamese, Western Classical, American, etc. Even within one country there are home grown variations. This lack of standardisation is reflected in the many books which have been written on the subject. And it’s shared by the, often obscure, rule books that accompany Mah-Jong sets. It’s a confusion that can be quite frustrating for the newcomer trying to learn the game.

The rules explained here follow those set out in “Mah-Jong (Know the Game)” by Gwyn Headley and Yvonne Seeley.

It was written in collaboration with the British Mah-Jong Association (BMJA) in an attempt to curtail the confusion over how to play and to allow the beginner an easier passage into the game.

Unlike certain other versions, the British game is quite close to the original Chinese gambling game, but it is played differently and with only notional money.

This website is an enhanced version of one that I launched, with BMJA approval, in November 2008 as MahJongBritishRules.com.

Besides giving an illustrated explanation of the British (BMJA) rules
it explains equipment you need and provides some advice about buying it.

There’s a gentle introduction to the game for beginners and a detailed discussion of  Mah-Jong strategy for more experienced players. There’s also a glossary  of Mah-Jong terms.

The authors of the BMJA rules have generously answered all my queries  about the finer points of the game. These can be found, along with answers to the many other questions I have been asked, in ‘Questions Answered‘.

You can purchase playing aids and an assortment of Mah-Jong gifts.

You can find a Mah-Jong club  or organisation.

There’s also a list of Mah-Jong websites with a quick guide to what they offer and if they are worth a visit.

Finally, there are links to a few Mah-Jong books which I think are worth reading

Covid-19 has at times made it difficult or impossible for many Mah-Jong players to play their normal game. However, playing online with your friends or club members is possible.
My book “How to Play Mah-Jong Remotely” shows you how to play online using your own set – and there’s an there’s and easy-to-learn, free online game called “Mahjong Friends Online” which allows you to play most forms of MahJong.
It also means you can play with others wherever they live.

Click here to find out more about this and other online Mah-Jong games.

Pictures from a Mah-Jong set

CLICK ON PICTURE TO SEE MORE INFORMATION .&. GET THE BOOKLET FOR FREE

Describes a somewhat unusual bone & bamboo Mah-Jong set bought on ebay and how it was used to create a variety of products from greeting cards to posters.

“…it was with some apprehension that I examined the contents. The dust, I finally realized, was bone dust. The set had never been used.”

NB: This is a PDF booklet.
Here’s an explanation

Mah-Jong items that you can purchase

Some relate specifically to the BMJA game but others might be of interest to everyone who plays Mah-Jong (Mah-Jongg/Mahjong…), irrespective of the rules they play by. The gifts may even appeal to people who do not play the game.

All the members of the Mah-Jong club that I belong to like to have my playing aid to hand. 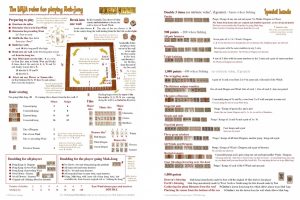 If you live in the UK you can purchase this A4 laminated playing aid here.

Anyone can obtain playing aids from my Zazzle gift store. They explain all the British (BMJA) rules on 5″ x 7″ (12.7cm x 17.8cm) cards. A larger card size is available for those who would prefer a larger print size.

An assortment of gifts

The graphics created for this website have also been used to design a selection of gifts which, again, you can obtain from my Zazzle gift store. Here is a small selection:

This allows you to play Mah-Jong using small cards – a less expensive option than tiles and easier to take on holiday. Unlike other Mah-Jong card games, it preserves all the elements of the traditional game as well as retaining the charm of traditional tile designs from the 1930s.
All versions of the game can be played with these cards, including American Mah-Jongg and Riichi Mahjong.
The rules are kept as close to the normal game as possible, only differing to allow for cards to be used instead of tiles. The Wall is still built (but in a modified fashion) and racks are used for the 1½” x 2” cards. The differences between this and the tile game are explained on a playing aid card (and in the instructions).

The game and playing aid can be obtained worldwide from my Zazzle gift store. ..Here’s a guide to buying it.